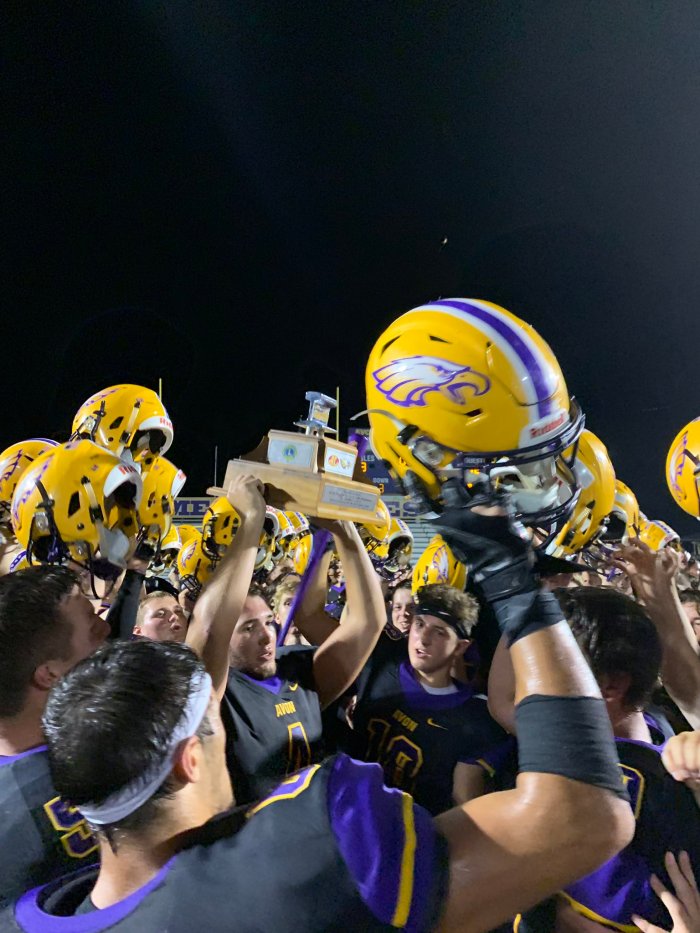 Avon, OH– The 2019 High School Football Season is upon Northeast Ohio.  The long summer is over, school is back in session, and football teams all across the area are starting their journey towards the ultimate goal: a state championship.  Our game of the week features a Southwestern Conference Matchup with two rivals that are always in the hunt for that ultimate goal.  The Avon Lake Shoreman and the Avon Eagles. What better way to kick off the 2019 season than a good old fashion backyard brawl.

Avon Lake received the opening kickoff and was met by a very stout Eagle defense.  Two negative plays and big sack by Avon forced a Shoremen punt.  Avon started their first drive on the Avon Lake 40 yd line.  five plays later Senior QB Danny Zeh connected with Senior RB Nick Perusek for a 23 yd TD pass and catch. Avon jumped out to a 7-0 lead with 6:28 left in the quarter. Avon Lake could not get anything going on their next offensive drive thanks in part to a stellar Eagle defensive effort, but mostly a product of untimely penalties.  As the opening quarter came to a close the Eagles held a 7-0 Lead.

Avon Lake’s defense stepped up their effort to start the second quarter, holding the eagles to a three and out forcing a punt.  Unfortunately for the Shoremen  the penalties were continuing to mount and mount on their next drive.  Avon Lake committed over 7 penalties on the drive and were forced to punt from their own 18 yard line giving Avon the ball at midfield.   The Eagles they drove all the way down to the 1 yd line after and looked increase their lead.  Avon Lake’s Defense had other ideas,  Senior CB Kai Kawalu picked off Zeh in the end zone.   Avon Lake would then go on to drive the ball 80 yards down the field for a touchdown, a 4 yd TD run by Junior RB Gage Duesler.  Avon would block the extra point attempt to keep a slim 7-6 Lead at the half.

The third quarter was a defensive showcase for both teams.   Avon Lake’s defensive line dominated the line of scrimmage forcing  3 sacks in the opening drive alone.  Avon’s Defense was equally impressive playing solidly in pass game forcing Avon Lake QB Michael Corbo to rely on his scrambling ability.  Avon Lake’s QB/ PK  Harry Hebert would tack on a 30 yd field goal to make the score 9-7 in favor of the Shoremen with 4:05 left in the quarter. Avon Lake’s Defense again stuffed the Eagle offense forcing another sack and a punt to end the quarter.  After 3 quarters of play Avon Lake held a 9-7 lead.

Avon Lake’s Harry Hebert would open the final quarter with another stellar field goal this time from 37 yds out.  Avon Lake held a 12-7 lead with 9:07 left in the game.  Avon would finally get into a solid rhythm offensively,  putting together a 78 yd scoring drive. Nick Perusek would score his second TD of the night, a 16 yd run on 4th down, a failed 2 point conversion made the score 13-12 in favor of Avon with 5:02 left in the game.  Avon Lake took over with just under 5 minutes left in the game at their own 20 yard line and only 1 time out left.  After an Avon sack and two incomplete passes the Shoremen spent their final time out to draw up a 4th down and 8 play. However, Corbo’s pass was incomplete at the first down marker and Avon took over on downs.  Avon would run the clock out in victory formation with the final score reading 13-12 in favor of the Eagles

Avon Lake Falls to 0-1 overall and 0-1 in Southwestern Conference play, they will travel to face Clinton-Massie in week 2.

Avon improved to 1-0 overall and 1-0 in Southwestern Conference play, they were led by player of the game Senior RB Nick Perusek who finished with 16 carries for 85 yds and 2 TDs.  They will travel to face  Lorain in week 2.